Gone for a Burton

Inspired by my grandparents’ hazardous flight on a cattle boat from Russia in 1905 and my grandfather’s bid to run a small time tailoring dynasty in 1950s Liverpool until his luck ran out. A three generational, postwar drama revealing clashes between Zionist and Communist dreams, the impending threat of big business and the lure of rock ‘n’ roll

“Absolutely loved your play! So sharp, authentic, laugh out loud funny and terribly moving, to say nothing about the sheer political relevance of where we find ourselves today.”

“You have once more drawn a fine picture of personalities and family relations, colourful characters in various states of conflict and wonder with the world. Packed with issues of the times and timeless ones, temperament, hope and exasperation. I loved its descriptions of a myriad of interweaving expectations of justice, values and disappointments. Undoubtedly a success as a definition and description of human history.”

“I can’t tell you how impressed I was by the quality of your writing. You’ve got a strong story, distinct characters, powerful conflicts, moments of deep emotion, a lot of laughs. I think the play captures a period of time in British history through a very particular Jewish lens. It reminds me of my own family with Irish Catholic connections, with some of the same political conflicts and generational conflicts being played out and I think others would see contemporary resonances – with British Asian families, for example.”

The Park Theatre for The Script Readers

JW3, directed by Jake Murray with David Fielder as Label and Hywel Morgan as Jack 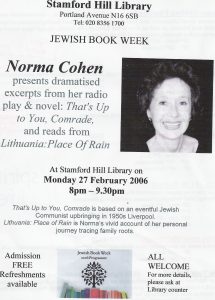 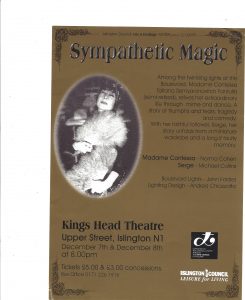 Does it come with Ketchup? 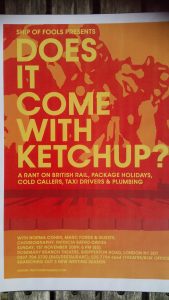 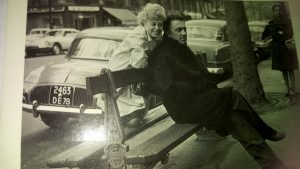 2019: immersive theatre performance of new version in a kitchen in Sidcup with Ben Bazell (Rocky in Rocky Horror Show, Pip Simmons Theatre Group, English Shakespeare Gp, Off the Page) as Fellini & me as Giulietta